Vans is happy to announce the release of DERP, a multifaceted project featuring our European skateboarding team.

In the mid 1970s a new breed of skateboarder emerged. Taking advantage of the drought sweeping southern California, these pioneering riders made use of the many empty and abandoned swimming pools that littered the regions backyards.
35 years later, hunting out new spots and making the most of terrain and obstacles not originally intended to be ridden is still a major part of skateboardings anti-establishment attitude.

Employing a dedicated team of urban explorers, we scoured Europe for unique locations rarely seen by the general public, and that have never been skated before, documenting the process as we went along.

We started at the Kupari Tourist Complex in Dubrovnik, Croatia which was heavily shelled during the conflict that beset the region, now only ruins remain of this sprawling complex. Next stop took us to the remnants of the Dutch Pavilion, a left over from the Expo 2000 World’s Fair in Hanover, Germany. Finally, amidst the Olympic fever of summer 2012 we ventured to Athens, Greece to explore the legacy of the 2000 games.

The resulting documentation is available via three episodes of DERP: Derelict Places and are exclusively available online at www.offthewall.tv
With the Dubrovnik and Hanover episodes already available, the final installment featuring Athens will be launched on 1 April.

The video edits are not the only part of documentation for the project; Vans has also produced the DERP zine which features 66 pages of photographic documentation by Davy Van Laere showcasing Vans riders like Nassim Guammaz, Sam Partaix, Kris Vile, Ross McGouran, Josh Young and others is available free at selected Skateshops across Europe. 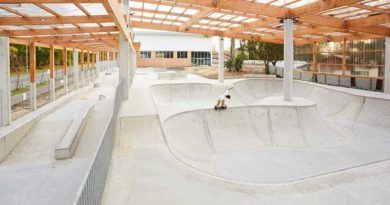